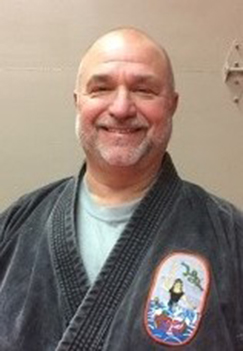 Carl started his martial arts studies with Kyokushinkai Karate while in college in 1978. His first instructor was Dan Soller who is now Kancho of Kyokoshinkai organization. By the end of 1978 Carl was also studying Isshinryu with Michael Wodiak. Sensei Wodiak was a 4th dan that had studied directly under Don Nagle.

After graduating from SIU, Carl remained in the Central IL area but was unable to locate another IR Sensei. The closest Okinawan style he could find was Shuriryu taught in Peoria, IL. Sensei Miler trained there for about a year and was given the title of Sempai. Carl moved to Virginia Beach, VA in the early 1980s and trained with Shihan Dan Montgomery. He considers Mr. Montgomery to be his Sensei and was promoted to Nidan while in VA in 1989. There he earned his Go-Dan through Shihan Montgomery and is certified through the IWKA. Between Dan Montgomery, Dan’s wife, and Carl, the three trained nearly hundreds if not thousands of Isshinryu students through the Virginia Beach Recreation Centers. Carl also taught a self-defense class at Tidewater Community College for several semesters.

Because of the large military presence in Virginia Beach, Carl had the opportunity to train various levels of special forces personnel in hand to hand combat. As fate would have it, he lived across the street from a group of SEAL Team 6 members back in the 80’s who would train under him when they weren’t deployed.

Carl is a certified Roku-dan or 6th degree black-belt through the IWKA, Isshinryu World Karate Association. Shimabuku Kichero O’Sensei requested that he report directly to him as his Sensei in all future endeavors. Although there are many good martial arts schools in the area, Carl saw a definite need for a style such as Isshinryu, which may be a little less flashy than some martial styles, but you don’t just buy a belt you earn it!

Carl also earned a brown belt in Shuri-Ryu Karate and through the years had additional training in Judo, Aikido and Kobudo. The Budokan is thrilled Carl has joined our staff of extraordinary instructors.