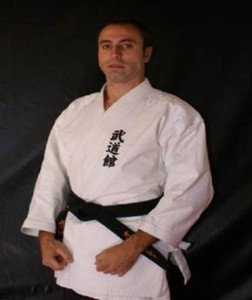 Liam O’Shaughnessy has participated and studied in the Martial Arts world under the guidance of his father (Thomas O’Shaughnessy) early in life. His exposure to the way came by an introduction to Judo at the age of 3 and then Shotokan Karate at the age of 9, he holds a Godan and a Needan respectively (5th degree black and 2nd degree black). As an adult in 2009 he began studying Brazilian Jui Jitsu under the Singer’s at Straight Blast Gym, Athens, Ga, he currently holds a purple belt in the art.

Over his career he has studied and is proficient in Boxing, Muay Thai and freestyle wrestling and enjoyed a brief career in Mixed Martial Arts. Liam currently Coaches and corners out of SBGi Athens, he runs their Judo program and is a chief striking coach for their fight team.

Students and guests of the Budokan are fortunate to train at special events offered by Liam when he visits.

Liam authored a great article ‘The importance of Martial Arts and MMA in the physical and psycological development of children.”