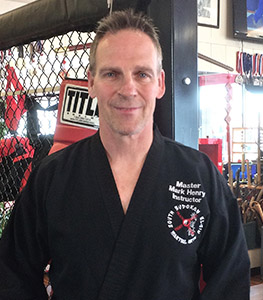 Master Mark Henry’s has taken the current Science of Sports’ strength and conditioning techniques and blended them into the various classes he instructs at the Budokan. Mark graduated from the National Personal Training Institute where he received his diploma as a certified personal trainer. He consistently continues his training education, earning 15+ additional training certifications to enhance his ability to train all levels of individuals. He has been voted “The Best” personal trainer in Kane County Chronicle’s Reader’s Choice in 2016 and 2017.

As the youngest of 4 brothers, Mark played a wide variety of sports, including ice hockey, football and baseball. He began wrestling at the age of 4 and competed up through high school, where he was the only sophomore on the Varsity Wrestling Team. During his junior and senior year, he shifted his focus to ice hockey and played both high school and travel hockey. Mark was named a conference all-star his senior year and went on to play Division II College Hockey. While in college, he turned to boxing and began his amateur career, competing for the next 5 years. Mark won the Loyola University TKE Boxing Tournament, was 2-time divisional runner-up in Chicago Golden Gloves Tournaments and 2-time semi-finalist is Chicago Park District Championships.

After college, Mark went on to play competitive slow pitch softball and won the United States Slow-Pitch Softball Association (USSSA) state championship in 1992. With a wrestling and boxing background, Mark expanded his knowledge into martial arts and self-defense. Mark had the unique honor of attending a 100 hour Krav Maga self-defense seminar, put on by the top instructors from Israel and the United States, including Imi Lichtenfeld, the founder and creator of the Israeli martial art.

Mark earned a Black Belt in Tae Kwon Do and then continued his martial arts education under the tutelage of Thomas O’Shaughnessy, earning black belts in Bujutsu and Judo. All of this experience and training has molded him into an effective instructor, coach and leader in various disciplines.

The honor of Budokan Chief Instructor  was passed on to Master Mark in January 2017. In addition to his martial arts and boxing classes, you will find Mark leading several boot camp sessions during the week, often outdoors, weather permitting. You can check his website at http://www.psnfitness.com.