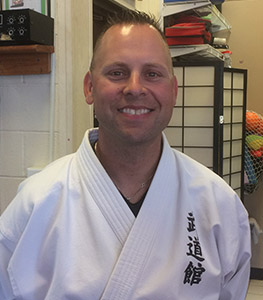 Dan started his martial arts training with Master Han Lee in Tae Kwon Do, Hapkido and Judo in 1990, where he promptly started his competition entries in Judo and Tae Kwon Do. In 1994 he earned his 1st Degree Black Belt in Kyuki-Do, an art which is a blend of Judo and Tae Kwon Do.
Sensei Dan’s ongoing quest for more martial arts knowledge and skill led him to dedicate many years of training in Wing Chun Kung Fu starting in 1993 with Sigung Philip Nearing. During this time, he also trained in Gracie Jiu-Jitsu under Reylson Gracie and Rubens Rodriguez, along with Jeff Neal. During weekends Dan began weapons training in Arnis with Chuck Morris specializing in single and double stick (baton) training along with edged weapons. His Arnis training continued for years under Master Ernesto Luis of the Philippines.

In 1996 Dan began training, and later on, instructing with Master James McKenzie and coaching fellow Kajukenbo students and competitors for many years. His competition experience continued in various martial arts disciplines to include mixed martial arts events (MMA record of 4-1) and his personal growth discovery of facing the challenges and learning the arts.

Dan is also a certified Firearms Instructor holding several shooting disciplines to include Center Axis Relock as well as other shooting related innovations.

Sensei Dan has learned from many great people in the martial arts world who include formal instructors as well as training his partners, many of whom have become lifelong friends. He has taught people of all ages from children to students well into their 60’s. Training and helping others in the martial arts is a very fulfilling mission he enjoys and is his present calling for teaching with us today.